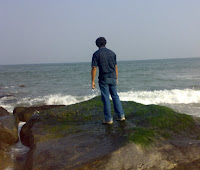 We’re running in the woods, giggling, falling and kissing.
Holding her in my arms I was the happiest man living.
And then she ran a li’l away from me, behind the trees
I could see her, and suddenly I felt a soft musky breeze
On my face, I closed my eyes and breathed it deep in
Opened my eyes only to found, my darling, nowhere to be seen.

It was getting dark and the lovely woods started looking scary
The trees were speaking to each other, the wind was fiery
I was running and calling her name, as I reckoned I was lost too
And I didn’t know the way back neither I know how to pass through.
The moon goddess were at her full glory, showing me the path
The forest was looking so mysterious in the moonlight bath

And then I realized I came near the sea shore, could hear the waves
Could see the waves forming and foams were leaving their trace.
Woods were behind and someone standing right in front of me
Her hair was open, white gown was touching the sands, it was my sweetie.
I slowly stepped behind her, held her and kissed her shoulder and neck
She turned around slowly and I was spellbound, shocked and quaked.

It was her, and my mind travelled back years ago, when we were together
When we were young and restless, when she was my life and I was her.
Her blue eyes had lots of question in it, her lips were yet so wet
And my lips sank in them, and I thanked thousand times to my fate.
Only I never cared to look at the beautiful sea, once more
As with waves, another white gown was trying hard to reach the sea shore.
Posted by ani at 2:40 am